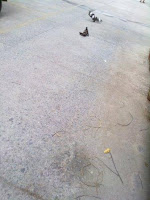 The cacophony was too much to resist. There was no time to record it, but my phone camera was at work within seconds. The mynahs were oblivious to every other presence. One pair was intent on fending off another. The intruders had been presumptuous enough to wing towards a nest being built atop an airconditioning unit. Clearly the owners of the nest were furious.
All one could see was a vicious flurry of wings. The attack was so intense that the ones flat on their backs didn't seem to have a chance. Twigs were scattered around; loud screeches, angry beaks and arched claws combined to complete the battleground effect.

I was afraid my presence would cut the scene short, but so wholly focused were the birds on protecting what was theirs that the turf war would probably not have ended till they'd drawn blood. But right then a young man off to work decided to drive straight over ground zero, to the relief of the besieged. The fight broke up unceremoniously as the four flew out of the car's way. It was all over in less than two minutes.
Nature in pictures, Part XI. 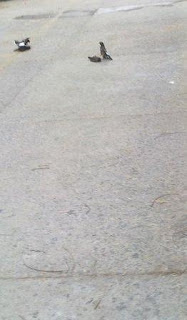