The eagle, ruler of the skies, ousted! 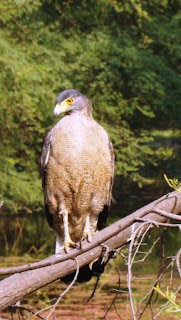 The husband and I visited the Bharatpur sanctuary recently. There were few birds around, but I captured on my camera (yes, camera, not my usual phone camera) this astounding one, perched barely two feet from where we stood. It is so magnificent, amazingly powerful and heart-stoppingly handsome, and yet the haughty bird had once been beaten: in this story in our junior school textbook. I can’t recall it all, but I’d like to pen what I remember:
The eagle was the most arrogant of the birds living in the jungle. The dapper wren did not like its authoritarian ways, and tried to rally public opinion against the self-appointed ruler of the skies. It longed for a more just society, not one subjugated for ages by the mighty.
When the eagle got wind of the goings-on, it threatened the wren with dire consequences, even going to the extent of saying nasty things about the health of its nestlings. The wren reinforced the nest where its little ones lay, and continued with its campaign for a new order in the jungle.
Most birds agreed with the wren, but were afraid to voice their support. The wren flitted quietly from one friend to another, till it had convinced most of them that it was time to put up a fight.
“But who would dare to challenge the big one?” asked the wise owl. “Let there be an open contest,” the wren suggested. “The one that flies the longest, and highest, will be the king of birds.”
The eagle was approached. The incredulous bird condescended to participate, secure in its belief that it was the strongest and none else could win.
On the agreed day, when the owl gave its hoot, it was as if day had suddenly been overcome by night. Wings flapping loudly, birds of all colours, shapes and sizes rose from the earth, each trying to outdo the other.
One by one, they began dropping out of the sky, unable to match the stamina of that which soared inexorably higher. At last, the eagle let out a victory screech, for it could see it was alone. “See, I am the king,” it shouted, and started descending. The brave wren, which had stayed right under the eagle’s wing, darted out at this point and flew over its head now.
“Not so fast, eagle, look up … at your king!” it twittered to the joyous cries that rent the air from the jungle below.
Posted by HARJEET at 05:47