What politicians have in common with birds 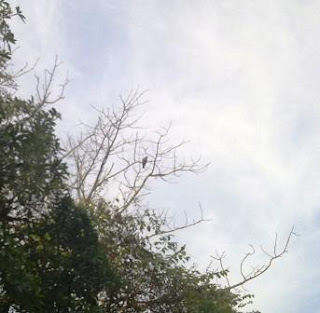 I was ambling instead of walking briskly that morning, my mind on the headlines I’d just read about Anna Hazare’s anti-corruption fast in Delhi.
A single bird perched atop a bare tree caught my eye. It sat as if it was a disinterested purveyor of all that walked the earth. Its neck was cocked impertinently to one side, and the body language…yes, that was a Eureka moment for me: it struck me that this ‘splendid isolation’ was also the defining characteristic of the political class.
Disdainfully aloof, politicians too behave as if they are masters of the universe, untouched and unmoved by what we, the people of India, want—or don’t want.
Ensconced in their ‘safe’ perches, it seems politicians take only a bird’s eye view of all that happens in the country. And like birds, they swoop to the ground only to feed their hunger (read votes). At election rallies, ‘leaders’ address voters from diases built tens of feet high, from where members of the ‘janata’ are mere specks. The suffering of this sea of humanity, immediate or long-term, gets only lip sympathy; soon the entourage (security and all) moves on to the next set of suckers.
Their ivory-tower existence has actually struck deep roots. Our ‘leaders’ are today above reproach, beyond accountability, a now-active judiciary notwithstanding. Over the years, they have abrogated all articles of faith, even as they have arrogated to themselves all conceivable powers to silence dissent or criticism by means overt or covert. Which of us is willing to stake a rupee on a politician’s word today? Do we believe them any more when they point a finger at one of their own ilk? Four fingers are pointing back at them, and for good reason. Scam after scam has rocked the country for decades now, but ‘leaders’ continue to roam free. If a rare conviction does happen, the ‘leader’ can still happily file nominations, run extortion rackets from jail, or attend to his ‘legislative obligations’ when out on bail.
Though always at loggerheads, politicians vote as one to jack up their own salaries in their only show of solidarity. Critical pieces of legislation can be shelved indefinitely, not this.
Then there's this recent move that puts an additional Rs 2,370 crore MPLADS burden on the common man. It is wholly unwarranted. What prevents members of Parliament from ensuring in their individual constituencies that each government agency is performing its duty well? Holistic development would be guaranteed. But such vigil would be too tedious for them, besides loss of benefits that come at our cost. And why look a gift horse in the mouth, when there won’t be a squeak of protest from those being milked?
They tax us heavily, breed corruption, gift away money, set up schemes to siphon funds that we contribute for better education, healthcare, infrastructure, law and order; they squirrel away our hard-earned money in secret accounts abroad, and woe betide if we question what they do.Witness the fate of whistleblowers.
These are inconvenient issues, shrugged off by politicians insulated from inflation, poverty and misery, because the entire official machinery is geared to serve them and their cohorts.
To the bird in the picture, it doesn’t matter that the tree bearing its burden is bare. What’s important is ‘splendid isolation’—exactly what the politician revels in, too. Let’s hope the #annahazare campaigners succeed in bringing him down a branch or two.